I was all set to start typing and for some reason found that there was a cat licking my arm. Said cat is now carefully watching every keyboard movement. Maybe spell-checking?

The weekend’s marketing activities were long but encouraging. The Highland Park Art Walk was by far the most challenging. Upscale folks bee-lining the front door of a shoe store have only one thing on their mind: Shoes. Not Art. Nevertheless, I did get several people to actually look in the window, talk about art and take a business card. The longer I do this, the more I discover that what The Boyfriend told me a year ago when I first started out is true. Talk to people about anything at all, even the silliest stuff. If you can engage their mind in a non-hustling way, they eventually get around to telling you that they like your art, at which point you can actually talk about the art. Oh yes, and about the award–it was a “merit” award, which is the equivalent of honorable mention. Considering there were over 30 artists represented, and only a couple of “merits” awarded after 1st, 2nd and 3rd prizes, that’s quite OK by me. You can see all the entries here: http://anatomicallycorrect.org/HighlandParkArtWalk2010.htm (there’s also a link on my sidebar).

The Fox Valley Saddle Association horse show was a long stint (10 hours) but the setup was nice and comfy. Indoors in the clubroom, with a long window wall out to the stadium-jumping arena. You could also see part of the cross-country course from the window. On the other side of the room, another wall of windows looked out to the indoor dressage arena. This show was a mini-“eventing” show for the lowest-level beginners (if you’re unfamiliar with eventing, its main thrill is the cross-country course where the horses gallop across fields at high speed over obstacles that do not give way if you hit them). This group of beginners had the same thrill, although on a smaller, slower scale. This being the Midwest, the outdoor activities were interrupted occasionally by passing storms, which resulted in lots of people coming to the clubroom and stopping by my booth. I have two more shows planned here for this summer, and hopefully everybody will get to know me even better the next two times around. Many people came by near the end of the day just to tell me how much they enjoyed looking at my work all day. Maybe they’ll discover they need to see it constantly–on a wall in their home!

Finally, I have decided the old Marlowe feed store painting is done. After much thinking and rethinking, I’m calling it “Coming On Lightly”. I know I will suffer in the next life for being so incomprehensibly “punny”, but I would much prefer to have people puzzling over the title than just nodding and saying oh how nice. 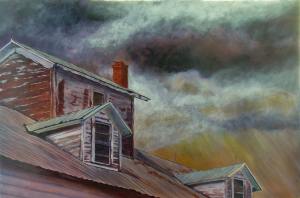 I took the final photo in daylight--the others were in incandescent. The colors aren't quite as yellow in daylight, and look more like the actual painting

4 Responses to Just call me persistent