A new kind of portrait 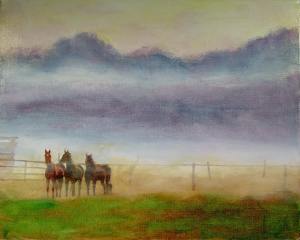 It’s been a while now, but you may recall from an earlier blog my story about how my letter to the Humane Society of Missouri offering to do a portrait got lost then found again. So in the meantime we had some conversations, and they decided that instead of a portrait of one of their Longmeadow Rescue Ranch horses, they would prefer a “portrait” of the ranch itself. The thinking was that this would be more likely to appeal to their donors when offered for the fundraising auction coming up in September. Since I believe they know their donor base way better than I could, I thought “why not?” They provided several professional photos (see caption at left) and I took the three horses from one of them and inserted them in a wide shot of early morning mist over the pasture.

This is the first pass–it will surely change at least a couple of times before I ship it to St. Louis. It looks a little bright right now, but another layer or two should tame down those colors a little and make it even more misty-looking.

4 Responses to A new kind of portrait