This year’s dose of dressage at Willow Tree

Today marked the inauguration of my brand new exhibit booth– 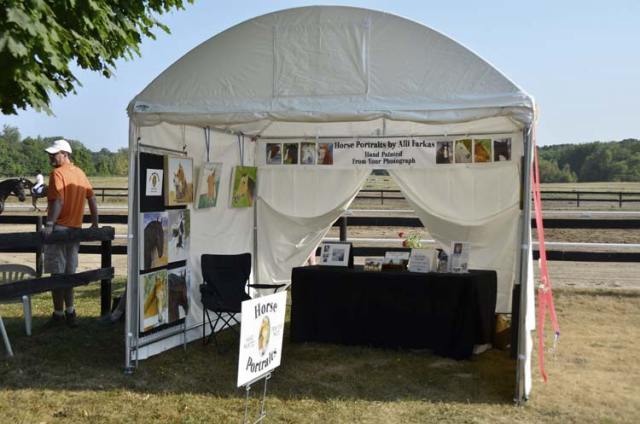 Looks a lot like the old one, doesn’t it?

There are several big differences between this one and the old one, even though at first glance they look awfully similar. This has a very solid round steel bar frame, with individual pieces that slide into one another and lock into place. It makes for a much sturdier structure. The single bars along the top and bottom provide a convenient configuration to hang both display racks and individual paintings. I especially like the top bar along the back to which I can attach my banner and it actually looks pretty straight instead of droopy and wrinkled! The side curtains (and also the roof) are heavy vinyl and don’t flap in the wind nearly as much as the fabric did on the old version. Forecast is possible thundershowers tonight–that would be a real change since we haven’t had measurable rain in at least two months–so we’ll see how the setup fares overnight and I’ll be hoping I battened everything down well.

Now for the more interesting stuff! Here’s Liberty Song, a lovely Hanoverian mare (I guess you can call her a mare now; I think she just turned 4). 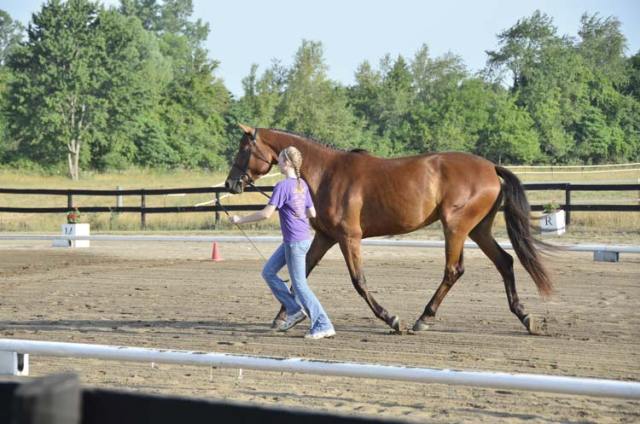 Liberty was bred and is being brought along by one of the trainers at Willow Tree, Marie Milliman (that’s not Marie in the photo). Slow but sure is the word of the day for Liberty’s training. She’s got all the right stuff for Grand Prix and we’ll see how far she goes. She took second place for the in-hand class.

Had a rare on-site sale today, one of the Aquabords went to the owner of the horse pictured on it. 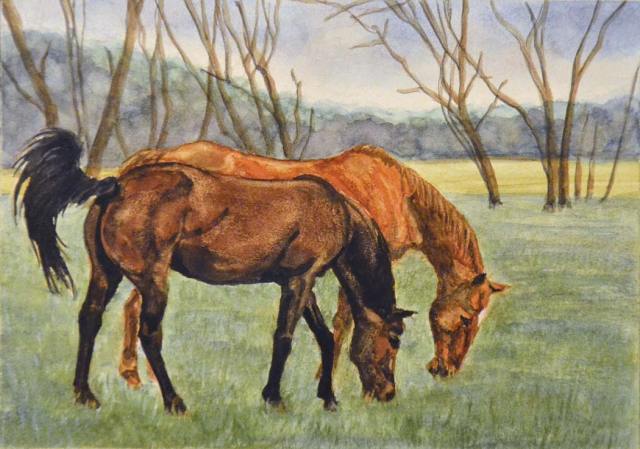 The chestnut horse is RT, owned by one of my fellow boarders. RT is in his late 20’s and looks like he is declining in health. It was just a coincidence that I had this painting on display and his owner saw it. She realizes she doesn’t have a whole lot of time left with him, and was absolutely overjoyed to have this keepsake painting. This is what makes my job so rewarding–making other people happy!