Charm and I are the tortoise, not the hare–but we are getting there all the same. Here we are at this past weekend’s annual 2-day dressage show at Willow Tree. 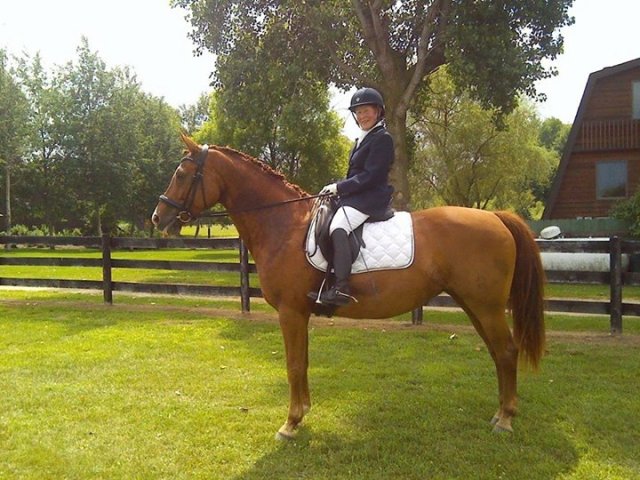 Here is Ms. Charm doing the perfect square halt–which not surprisingly she declined to do when it was for the judges to see…    (photo courtesy Wendy Fisher)

And here’s our collection of weekend swag. 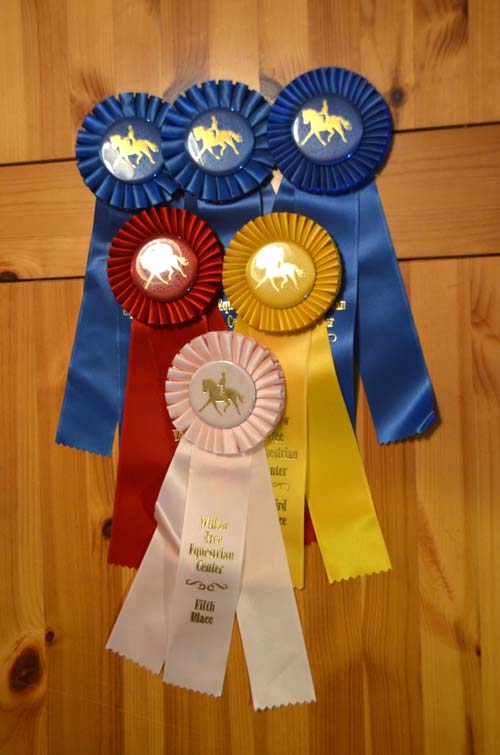 More of the world’s most expensive pieces of ribbon, but somehow so satisfyingly worth every single penny.

We did quadrille again this year, which accounts for two of the blues. I got the third blue for Training Level Test 3, which I was sure I had flubbed but somehow came out on top of 7 other competitors in the class. The real reward, however, was that this class’s score put us firmly in the 60’s (64.318%) after struggling and stuck in the 50’s last year. We also scored low 60’s in the next class up, First Level Test 2. Gratifying to see that we could still get 60’s in a technically more difficult class. The quadrille, on the other hand, is our star vehicle. Our team of four riders scored in the 80’s, just like last year. Which is truly astounding. It’s judged on many qualities, among them suitability of the music, creativeness and appropriateness of costumes (both horse and human) as they relate to the musical theme, beauty and difficulty of choreography, and accuracy of execution of the movements. The quadrille requires a lot of work on the part of all the participants besides simply riding.

So “St. Willow Tree” smiled on us again by keeping the weather under control–a bit on the warm side the second day but not hot enough for the judge to waive the jacket requirement. Since I like wearing my originally expensive but ultimately tent-sale cheap Pikeur dressage jacket I always appreciate it when the weather cooperates. Now my only job is to get Charm, aka Ms. Sassypants, to cooperate on demand. We know she has the potential to do all the moves, but we still have to convince her that it would be nice if she would do them at other times than just when the mood strikes her. Last year’s piaffe in front of the judge’s stand (because she knew I was asking for forward but deemed the obstacle spooky) is an outstanding example. Back to the journey!

3 Responses to Slowly but surely