If you read my previous post you are probably wondering if almost three weeks later I am able to un-cross my eyes. The answer is yes, although I must say that trying three different pairs of hard contact lenses in the time didn’t help matters much. Still working on the lenses, but at least this portrait is complete. Here’s a little tour of the project from the original photo to the finish.

The reference photo was taken on the sly by the intended recipient’s daughter. She was back at the old home place in Connecticut for a little vacation and wanted a present for her father, but didn’t want him to know what was up. She couldn’t just remove the photo from the house, so she sneaked a snapshot of it with her cell phone. Not the best way to get a nice square well-lit picture, but at least it was a picture…. 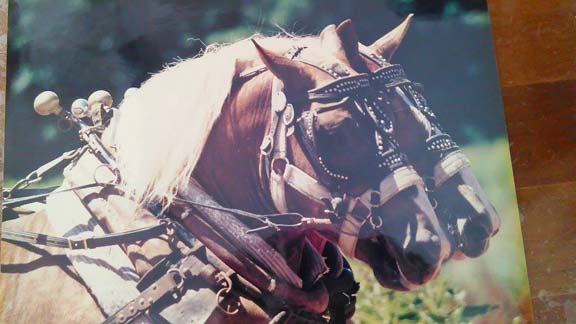 It’s pretty obvious that this photo has some problems, among them glare from the glass that covered the original, harsh lighting obscuring a lot of the detail, and uncertainty as to the actual color of the horses. First problem to tackle was straightening up this photo and getting it to the size proportions needed to fit a 5″ x 7″ Aquabord™. 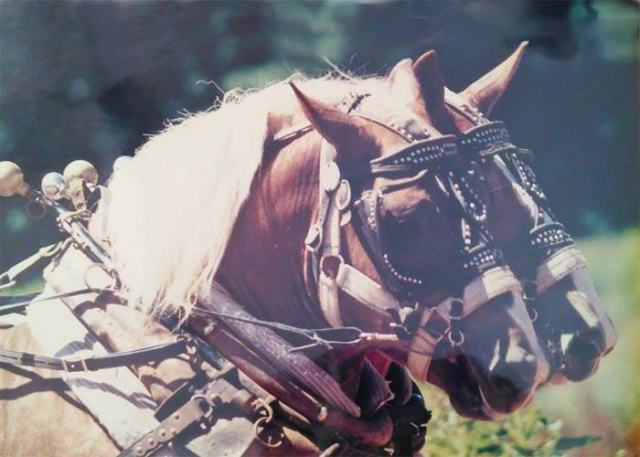 The cell phone photo after it was straightened up and flattened out in Photoshop.

I needed to add some Photoshop foliage to the top of the picture to fill in the space in the 5″ x 7″ format. That was probably the easiest part of the entire process. Next came the drawing, which was where my eyes went buggy. You (or I) look at this photo and think, well, I see all the detail quite clearly. It’s a whole different matter when trying to reproduce that detail that your eye thinks you saw before you had to actually recreate it–especially in the dark areas. I tried every which way to lighten this up in Photoshop so I could perhaps see some of what was going on the the dark areas, but I ended up (after much procrastination) just winging it from the eyeball down to the nose of the front horse. Here’s the painting pre-eyeball… 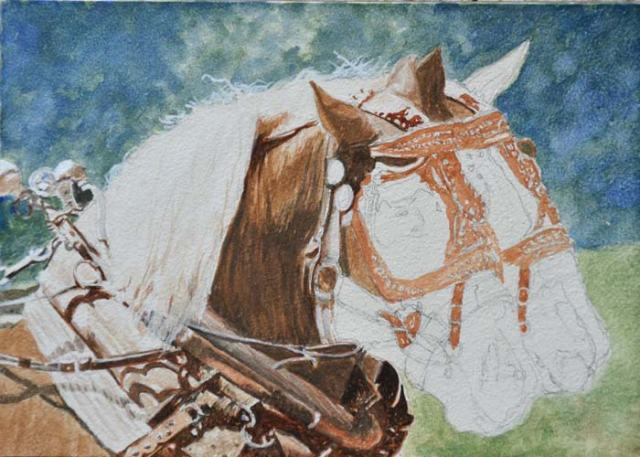 See anything that looks like a clear drawing in the eye area? Me neither.

I had to query my client about the true color of these horses. The photo looks awfully red and I was suspicious that this color was not realistic. She described a color as sort of a palomino trending toward liver chestnut. Fortunately I’ve seen so many of these “ponies” that the description brought up a color instantly to my mind. It’s more like a buff-brown with some golden highlights (oh yeah, easy for me to say), so I played with a few watercolor mix combinations till I thought I got it fairly right… 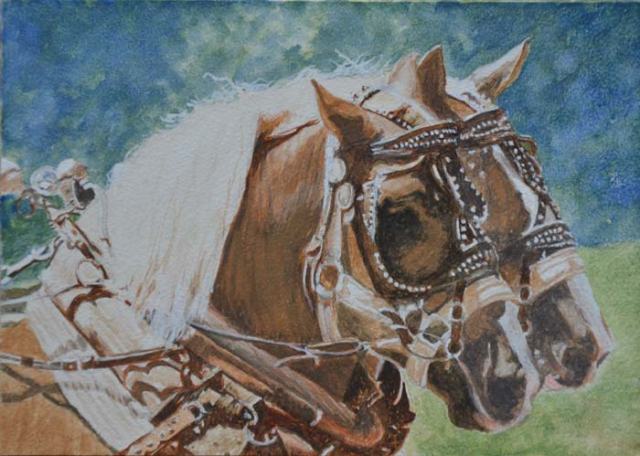 Final result and time to rest my eyes…

And so, mission accomplished. It goes to my client as soon as the varnish is dry. She upped the gift-giving deadline to Thanksgiving but fortunately we more than beat that time.