A month or so ago I mentioned that I had won an incredible prize just by donating to a website I subscribe to. One I never expected to win, but always wished I had. I now can proudly say that I have professional-looking mesh panels in my booth tent on which to hang any number and any size of artwork I wish. This is such an improvement over my two previous setups. The landscape setup has overly large paintings which would blow and twist in the wind so they never hung straight. The horse portrait setup required racks which limited the number of paintings I could exhibit. Both issues solved!! 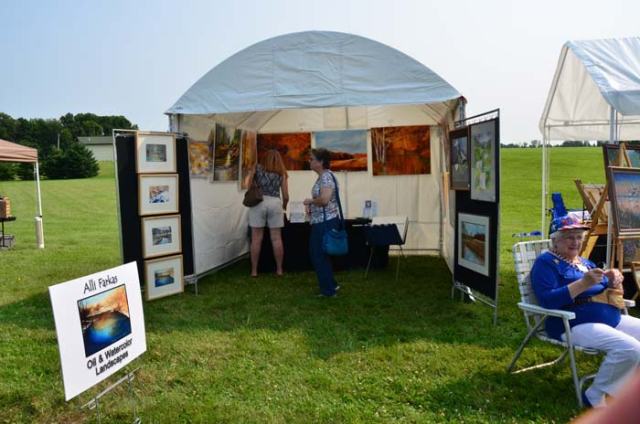 The old horse portrait setup, not as jumbled but things are stuck together rather tightly.

The landscape setup of my booth with wonderful mesh panels.

It’s hard to believe things could look so much improved just by having the paintings hanging straight and flat against the panels. I set up this photo very carefully because art shows often ask for a booth shot so they can judge how professional you look before they let you in. The website I mentioned above is artfairinsiders.com and they have an article on how to create a photo that is more likely to get judges’ approval. One thing is the angle, showing more of one side panel than the other, otherwise known as a “3/4 view”. So I did that. Second tip is not to show anything outside of the booth, such as the area it’s set up in or people standing around. Check! One other tip is to have either a nice carpet surface on the ground or some really nice grass. I had neither, so I Photoshopped the grass into the picture. Took a while, but I think I got some acceptable fake grass for my efforts!

Equine and landscape artist specializing in rural Americana
View all posts by Alli Farkas →
This entry was posted in Uncategorized. Bookmark the permalink.

6 Responses to The mesh panels…YES!