If you were to look back over several years of my posts about the Reins of Life benefit dressage shows, you would notice a consistent theme having to do with rain on show days. This year threatened to be the same until, in stereotypical Midwestern weather fashion, it wasn’t. The sun shone brightly for both days this past weekend and the temperatures were ideal. So, let’s go outside and see a bit of what was going on.

We’ll start with Western Dressage. This show had quite a few WDAA competitors, and Western is an up and coming popular activity. Some dressage trainers don’t like it, thinking that the horses are still being ridden in too much of a Western Pleasure style–in other words, not getting the true benefits of dressage. I guess we’ll have to wait and see how that shakes out in the future.

Here are some shots from my phone (ugh) because I didn’t feel like dragging my heavy SLR around. Should have suffered the weight for better photos!

They called it a lope in the test, but this looks to me like a nice canter

The regular dressage classes at this show seemed to have a peculiar requirement–you must have a gray horse in order to enter. Kidding of course, but I saw more grays than I ever have, and the only way I could tell these two apart–as an example–is because one rider wore tan breeches and the other wore white. 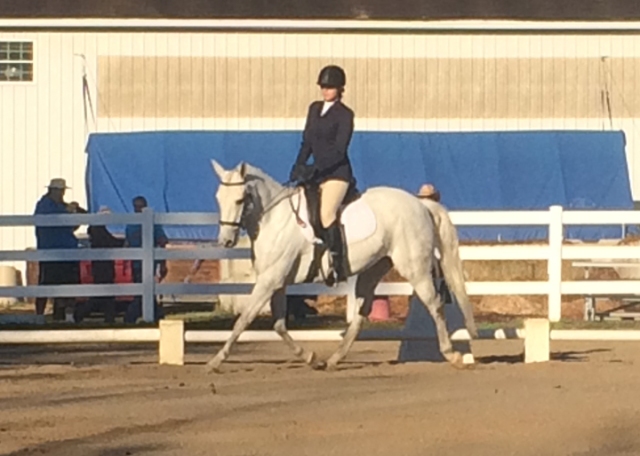 In honor of the grays, or perhaps just because I felt like it, I worked on a dressage-themed Aquabord™ watercolor featuring a (sunbleached?) gray while I sat in my portrait booth.

I titled this Aquabord™ “Anticipation”. Should be available on my website shortly–www.allifarkas.com

Oh yes, and speaking of the booth– 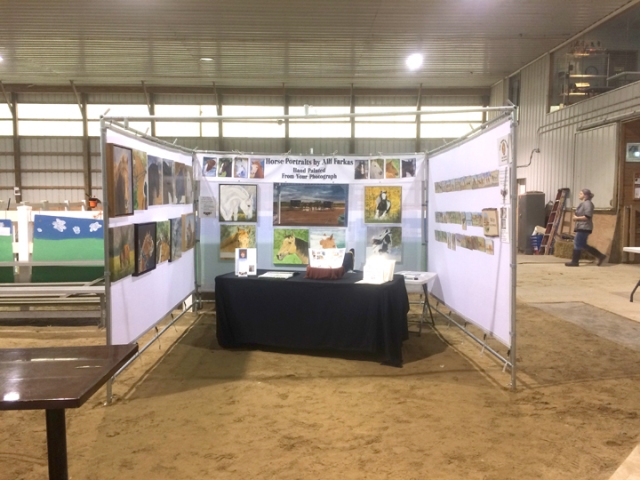 The booth for all occasions

There is something missing with this booth–as in, a roof perhaps? The best part about those mesh panels I won a while back is that they get almost everything off my table and also allow me to hang a whole lot more oil portrait samples on the walls. I decided to see what would happen if I brought the tent indoors but didn’t put the roof on it. After all, it wasn’t supposed to rain indoors. So it worked perfectly without the roof and the mesh panels did their usual stellar job of getting passersby to hang out longer looking at my stuff. The Reins of Life director, who always does her best to accommodate me, also had a little surprise after I set up the booth. See the corner of that table in the lower left portion of the photo? She used the table to put the score sheets and winners ribbons out for pickup by the competitors, thus insuring that almost everyone at the show had to pass by my display sooner or later. The score sheets were also oriented so that the winners had to be facing my booth when they picked up their results. It was wonderful!