And now for something (really!) totally different

Charm and I don’t do so well on the trails, or in strange places such as horse shows not held at the home barn. I can manage her, but I’m not exactly comfortable or sure of myself while doing it. So when the opportunity came up at Willow Tree to take the 2-day “Confidence Course” I jumped–well, not exactly jumped–at the chance to expose both of us to all the things a horse might be likely to encounter on or off the property (wild animals excluded). But there was a fire-breathing dragon…

The course was taught by Sara Lowe, who professionally trains mounted police units all over the country, aside from being a law enforcement officer herself in her home state of Wyoming. She generously agreed to forego the fireworks part for our training 😋. However, she did have flares, smoke bombs, quite a supply of those “party poppers” which she would toss against the arena walls at random moments, and an air horn which she also chose to use randomly as we were trying to negotiate such things as a teeter-totter bridge. Here’s a link to Sara’s business page on Facebook:

And below is a bit of commotion from the second day, just to give an idea of how intense the environment was. We slowly built up to this level so that we could always be successful at each step. Wendy, our barn manager, is describing some of the stuff that’s going on. There were 12 of us all together, which by itself made for a lot of commotion. The dragon is off to the right behind the scary bubble machine. It had a glowing red fabric tongue that floated out from its mouth. Charm stood there and let it bump against her nose. 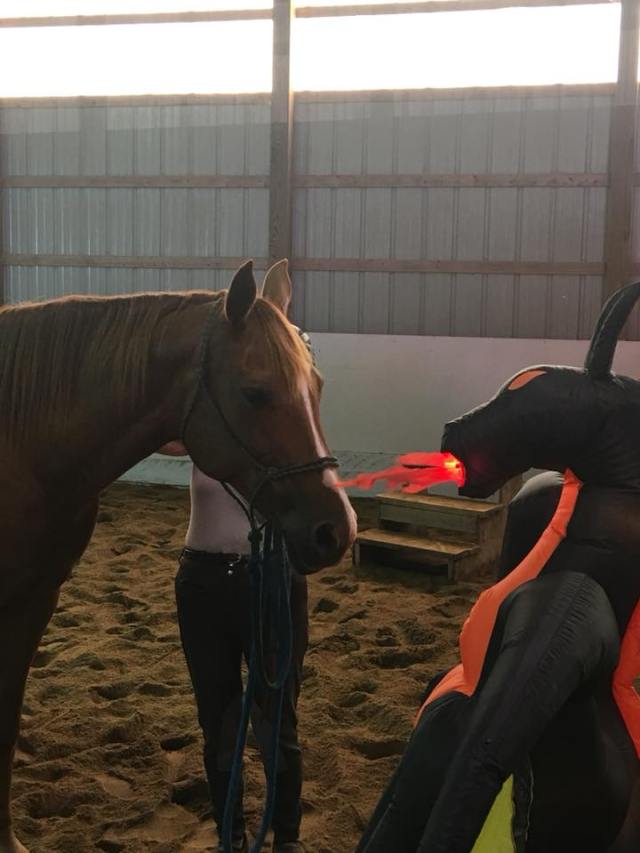 The dragon…photo courtesy of Sara Lowe

There were two very big things missing from this video: 1) the road flares which were lit and placed a few feet apart are hard to see behind some horses–look carefully to center left side about 10 seconds from the end; and 2) one of those huge air-powered “blow-up” men like you see at car dealers was set up a bit later. That thing went up into the rafters and down again, over and over, besides being really noisy. After I let her watch a while from a distance I parked Charm under it, it went up and down right over her head, and she completely ignored it. 🦄

In the video Charm and I are standing in the middle of the ring. She’s the chestnut with the crooked blaze. I am the only one wearing a helmet for ground work the second day. And glad I was–there were a lot of excited whirling horses out there, along with owners who were concentrating so hard on their horses they forgot they were not the only creatures out there!

This is Desi, not Charm of course. But the capture of the bubbles is perfect.

This bubble machine was the bane of almost every horse. Charm hated it, but eventually managed to walk through the bubbles if she could keep about 5 feet away from the actual machine. It was even worse when the bubbles began to stack up in a mound on the ground. You would think that Michigan horses who had been around snow all their lives would not be intimidated by a few bubbles blowing around and landing on the floor. But they all must have gotten together and agreed that these weird floating things didn’t belong in the indoor arena. 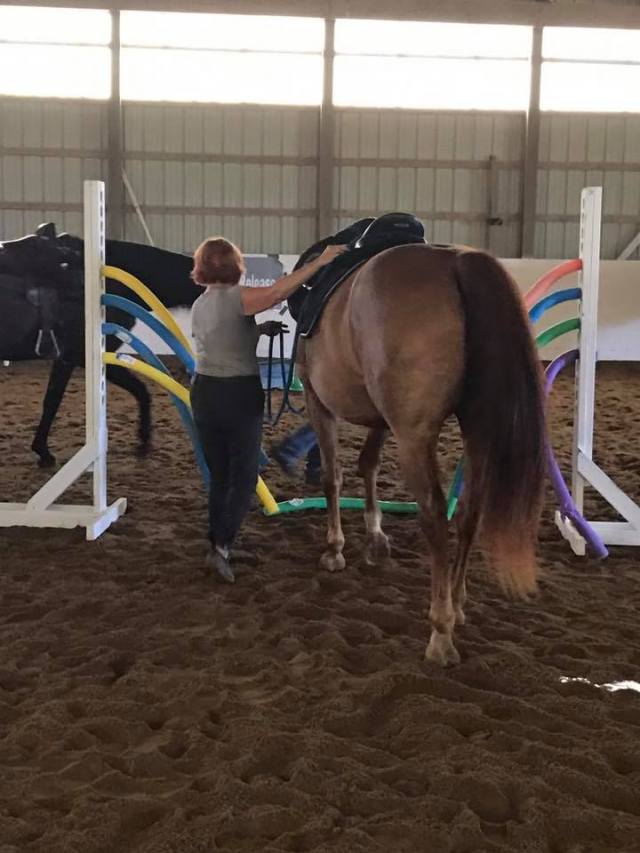 Leading Charm “from behind” through the pool noodles.

On the first day we started with the most preliminary of basics, learning to get control of the horse’s shoulders and hips on the ground. In order to be safe, we have to be able to quickly and easily move the front end and the back end of the horse where we want it to go. We also have to teach the horse that we humans have a personal “space bubble” that they are not allowed to enter unless invited; this will keep them from pushing into our space if they get anxious. Once these ideas were presented, we worked on them and then went on to the concept of “leading from behind”. The purpose is to make it the horse’s idea to negotiate the obstacles. We could lead them as most people do from the front, but if we do then they are following us and not building their own sense of courage. We open a generous loop of lead rope to the side, inviting them to go through the “door” we have created, while keeping our own bodies back at the saddle area with the other end of the rope over the saddle or behind the cantle, depending on how well we’re negotiating the route at any point. If we get stuck at an obstacle we can always give a little twirl with the end of the rope from behind to get the idea of “forward” across. We always encourage from behind, not pulling from the front. By presenting all the obstacles from the ground, the horse learns to negotiate them by himself and will be more willing to do the same when we ask from the saddle.

Charm heading down the teeter totter after it shifted sides.

Charm negotiated the teeter totter a lot better from the saddle than from the ground. It took a few passes on the ground to convince her to stay on the bridge–she seemed to think that she could just leave it at any moment. Which she could have, but that wasn’t the point! The downside to that was she threw a shoe coming off the edge. However, it didn’t mess up her hoof and the arena sand is quite soft so we carried on minus a right front shoe.

When we mounted up, the obstacles were in a path along the ring walls and up through the center line. Sara taught us the basics of mounted patrol drill team commands and had us ride in single file and sometimes pair formations. She also wanted us to keep a distance such that we could see only half of the tail of the horse ahead of us through our horse’s ears as we went over the obstacles. That got quite interesting as we passed over the teeter-totter because the horse ahead wasn’t always clear when the next horse stepped on. I think Wendy missed that part of the instruction, but here’s a clip of her making fun of us for “cheating” by stepping on the bridge too soon! I guess that’s the tradeoff for her services as an unpaid videographer. Final evaluation of the two-day course: Worth every last penny! Highly recommend!

6 Responses to And now for something (really!) totally different