I won something… and it wasn’t a raffle

Yesterday was an annual event in Elkhart, Indiana called the Taste of the Gardens. The gardens in question are the Wellfield Botanic Gardens. Lots of good food, lots of live music, and 60 artist/craft vendors including yours truly. I signed up for this event in order to have the most appropriate venue to promote the Sky Pads paintings. Every decent botanic garden has to feature at least a few water lilies.

It started out as a very foggy gray morning, and by 11AM it was still behind schedule for becoming “partly sunny”. This is one of the reasons I really appreciate the skylight feature of my wonderful Trimline booth. Even with a gray day there’s enough light inside to do justice to artwork. 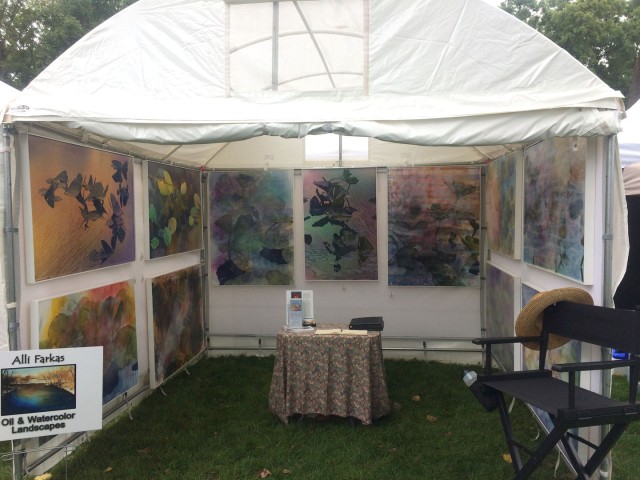 Now about the “partly sunny” situation. I was thankful later on for a generous supply of large trees as the clouds and fog dispersed and we experienced probably one of the hottest and muggiest days of this summer.

One of the four vendor lanes at Taste of the Gardens. With a lot of trees. This photo was before the event opened. It got quite crowded when the gates opened at 11. Which was great!

I had decided ahead of time to take advantage of all I learned a few months ago at the “how to increase your traffic/sales at an art fair” seminar . One of the strategies was to attract attention by putting one of your best, flashiest, most interesting paintings at the top of the left side of your left tent wall, and the right side of your right wall. For the left side I chose the recent “butterfly/bird” illusion which also featured the poured paint striated texture underneath.

The top left image is important!

The tactic worked perfectly. I had people coming into my booth who said they saw that painting from way down the row! The secondary advantage was that almost everyone tried to figure out how I got the background paint to do what it did, and so I got a great opportunity to discuss that and other aspects of my painting too.

Oh…I remember now. This post is supposed to be about something I won. It was the “Best Overall” award. And best of all, it came with $$$! There were two other awards, one for best booth display, and one for best expression of the gardens. I’ve never been a “best” anything, let alone a “best overall” something. This is pretty incredible. So many thanks to the wonderful folks at Wellfield!

Oh…and I now remember something else. My last dressage show on July 29. I got my first ever Grand Champion ribbon at any dressage show, any level. This one was for first level, and it was a long time coming. Charm and I have been chipping away at first level for four years, mainly because we’re both old and stiff. But one of us seems to be suppling up a bit (the four-legged one). We may start making a tentative stab at second level next year. If Ms. Sassypants continues to think it might be a nice idea. 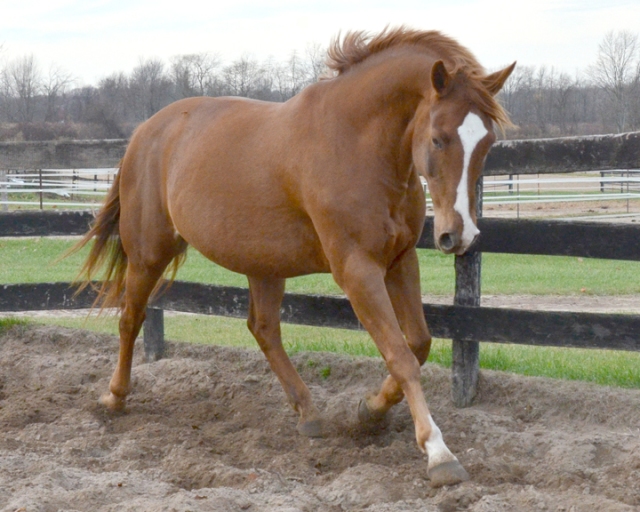