Yesterday morning started out with icy roads and overturned cars. Fortunately I wasn’t among them, but I came close to it. My destination was a seminar on horse and rider biomechanics, presented by my trainer Karin Bielefeld. In spite of the road hazards the event hosted a full house (which may have given us the misleading impression that we weren’t as cold as we thought we were). The fact that for eight frigid hours we all paid attention, asked questions, followed instructions, and wanted even more attested to the interest and enthusiasm brought to the table by all involved. Consider this sufficient explanation for all of us looking like we are bundled up for an arctic excursion. 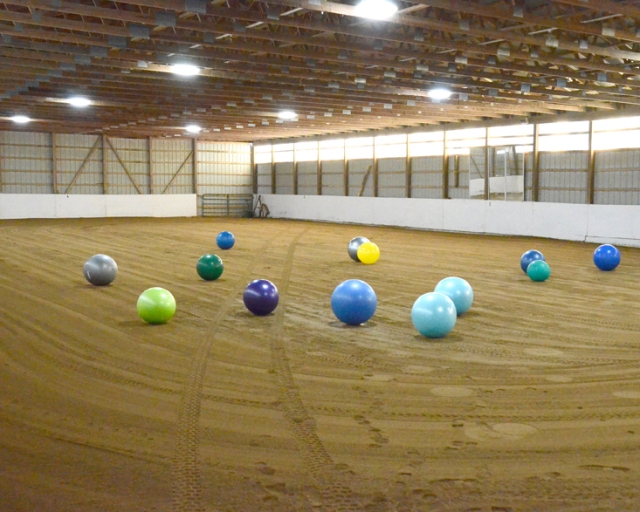 Did someone leave some giant jawbreakers out here?

This was the scene that greeted participants as they entered the riding arena. It doesn’t look like it has much to do with biomechanics, but those who were wondering were not left uninformed for long. 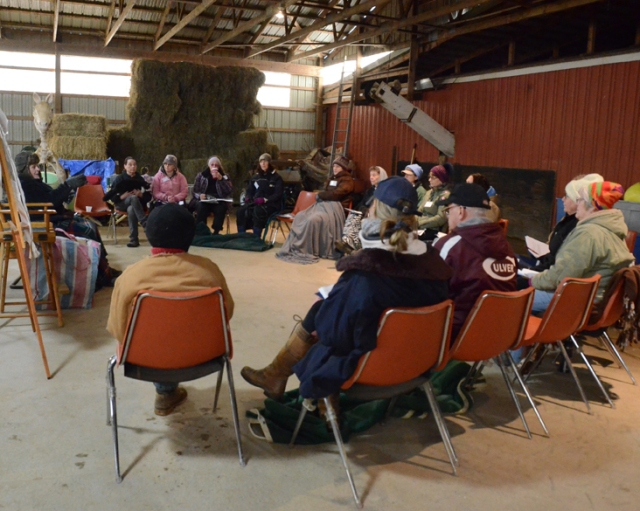 A campfire would have been nice in the middle of this circle.

This deck area is right next to the ring, and it’s the perfect place to set up whatever props you need to illustrate what you’re talking about. Every participant had a folder chock full of information to keep and study after each presentation and discussion. The special thing about this particular seminar is that it embraced two parts, one theory and one actual riding. Auditors got to experience everything the riders did in the preliminary presentations even though they would not be riding an actual horse later on in the day. So, back to those big rubber balls… 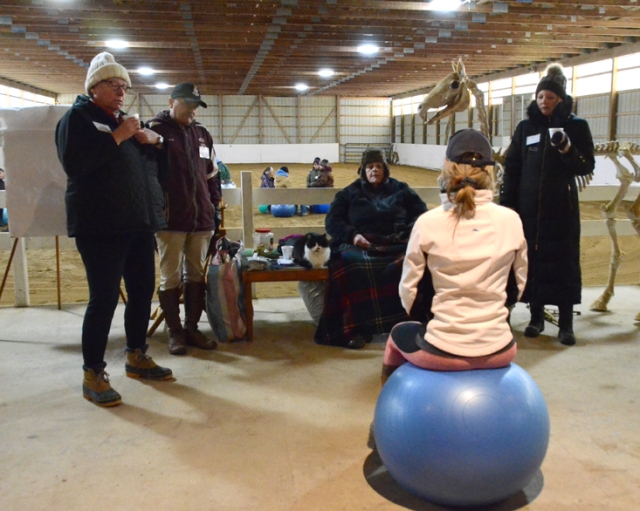 The rider sitting on the ball quickly discovers that the slightest movement affects the ball. In the same manner, the rider pushing his seat forward or backward, sitting to one side or the other, moving only one seat bone forward, sitting more heavily on one seat bone, or even tightening only one buttock will move the ball, even if only incrementally. By the same token, these incremental movements can also be felt by the horse. Which is why riders often get the “wrong”  results, or unintended results, when they are unaware that these small movements can have such a direct cause and effect. 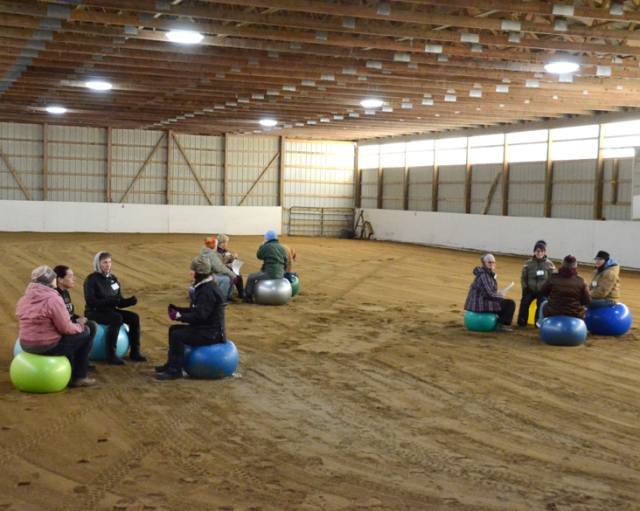 Now that everyone felt how many different ways they could move their seat it was time to see how core movements could also travel all the way up the reins to the horse’s mouth. Who knew? 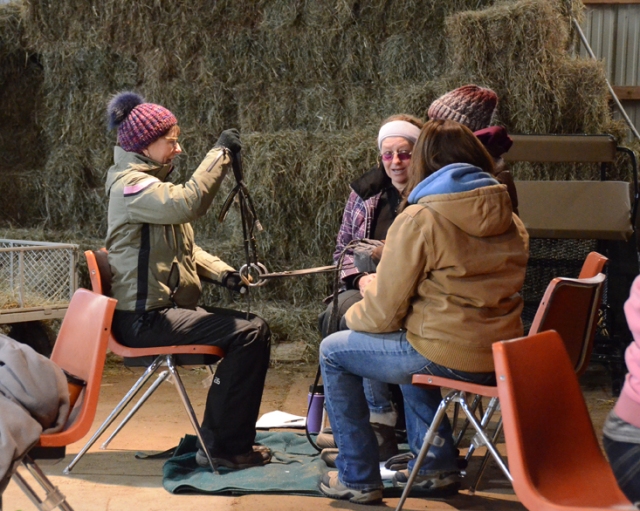 Here we have a “horse”, on the left, and a “rider” on the right. The “horse” holds the bit in one hand and aims to detect any difference in the bit position or pressure generated by the fingers, arms, core, back, or chest of the “rider”.  The “horses” were astounded to discover how every tiny tweak, every smallest half-halt, causes a definitive movement of the bit. Even moving one seat bone forward or tightening the abs creates a feeling through the bit! Imagine how annoyed a horse must feel at a rider who is constantly fiddling with the bit or moving various parts of their body around! No wonder they often seem to tune us out! 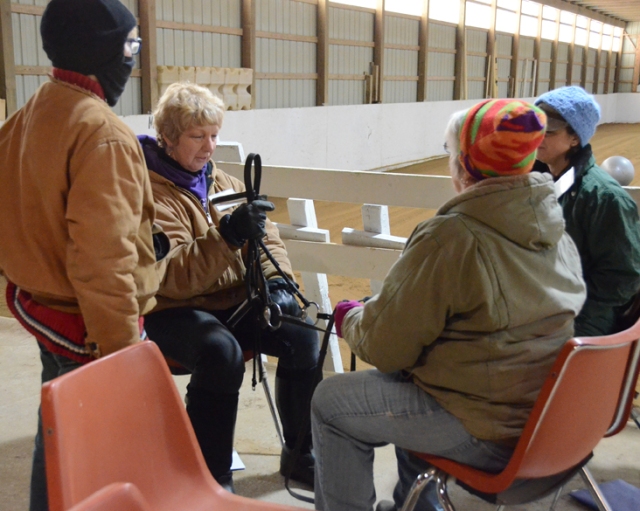 Everybody got a chance to be both “horse” and “rider”. The hard chairs helped the “riders” feel where their seat bones were at any given point in time.

Having acquired some experience with body position and contact, participants next got to experience balance–both their own and that of the horse. Behold the balance beam– 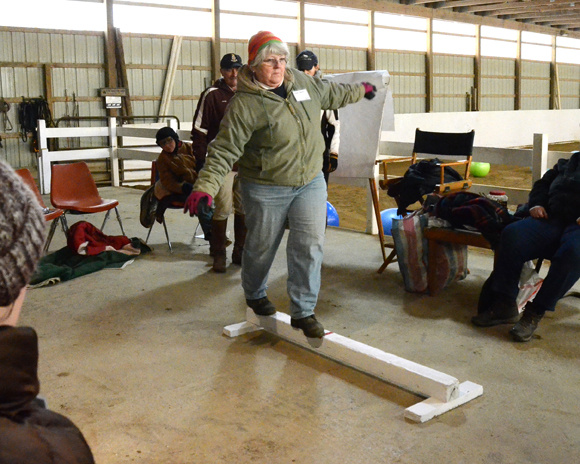 This very low balance beam can be a difficult proposition if you aren’t allowed to look down. Some participants veered off after only a couple of steps. The solution becomes a matter of trust. 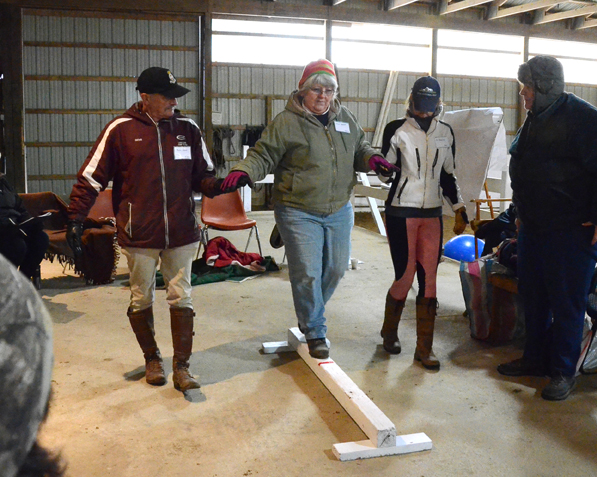 It’s quite simple if you can just rest your hands on a consistently level surface that you trust. These sidewalkers provide a consistent unchanging support, not holding the person up but providing a reference point she can have confidence in. This carries over to the idea of the horse accepting the bit and using it to create his own balance. When the horse knows that a consistent reliable contact will be there, he can rest comfortably on the bit without leaning on it and without the rider pulling on it. After experimenting with this phenomenon only once, the human participants could rest on their partners’ support and easily walk the beam without looking down.

Along the way scattered among these exercises and experiments were informational nuggets about what dressage really is and where it came from, what “aids” are and how a horse understands them, signs to look for that your horse is relaxed, cardiovascularly fit, and mentally ready to work with you. Also included in the information folder given to each participant was a series of drawings and explanatory text detailing the physical structure of the horse and how each part must develop to enable horse and rider to work together. On the last page we are consoled with this message: “In closing dressage is very simple and straightforward. It’s understanding why that’s hard!”

This got us up to lunch time. Home made hot crock pot meals provided by barn volunteers. Most welcome!

Next it was on to the lessons for the riders. In the interest of not making your eyes glaze over, I will present only three that illustrated specific points not usually seen in riding clinics. 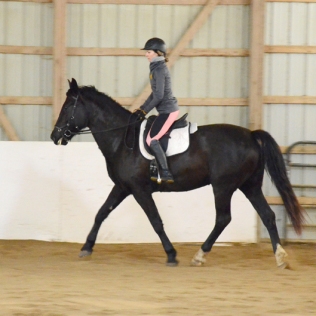 Half way to figuring out it’s OK to relax. 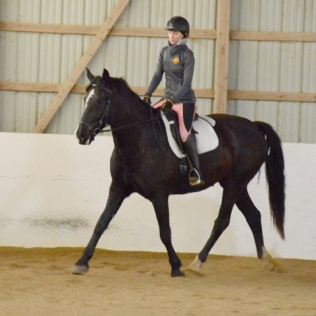 Calm, willing horse at the end of the ride.

The mare above had an unusually intense episode of distraction and unruliness upon entering the ring. The rider is an accomplished equestrian. Nevertheless, she was making little progress quieting the horse enough to have a productive ride. Karin’s solution was the exact opposite of what we usually see trainers and riders doing in such a case, which is, lunge or chase the horse until it’s had enough and gives up the behavior. The solution  related precisely to points made earlier in the morning about determining if your horse is mentally prepared to work with you. The horse was turned loose in the ring, and the rider was instructed to quiet her mind and body and concentrate only on the horse and her own quietness. She had a lunge whip which initially she held vertically between her body and the horse (the horse was quite pushy) but used it only to direct the horse occasionally, not incite it to action. The horse was allowed to go where it wished as long as it did not stop at any point to get distracted by the audience or perhaps investigate the muck bucket in a corner. Then it was gently prodded recognize the rider and to move along. Eventually it would occasionally stop and look at the rider, sometimes taking a few steps toward her. The rider was then instructed to walk away from the horse, which then followed her. When the horse had repeated its tactics of trotting off and returning to follow a few times, horse and rider eventually stopped and faced each other a few feet apart. The rider mentally invited the horse to enter her space, which after some consideration it did and was rewarded with some soft strokes. The rider was then able to mount with a vastly reduced level of fuss and Karin directed her how to use her body to keep the low-key spirit going. The mare was still a bit tense, but as the ride progressed she became increasingly relaxed and as you can see in the two photos above her body language went from stiff to flowing. The auditors could clearly see this progression, which is not often so obvious in clinics where the horses are for the most part obedient and cooperative. 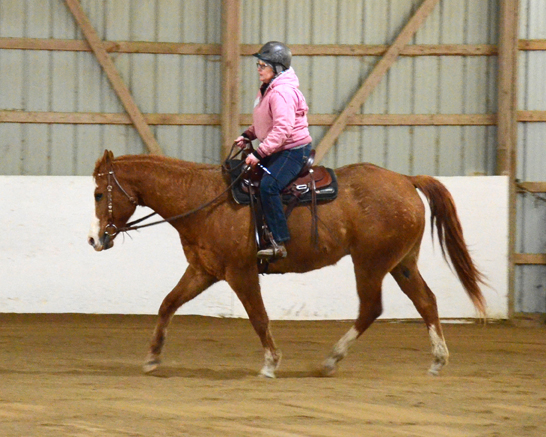 Cute western horse shows dressage is good for everybody.

Our second example above is short and sweet. The rider was puzzled about her cute western horse’s tendency to always want to turn left away from the wall. This was a super easy fix once Karin helped her realize that she rode with her body tilted to the left! 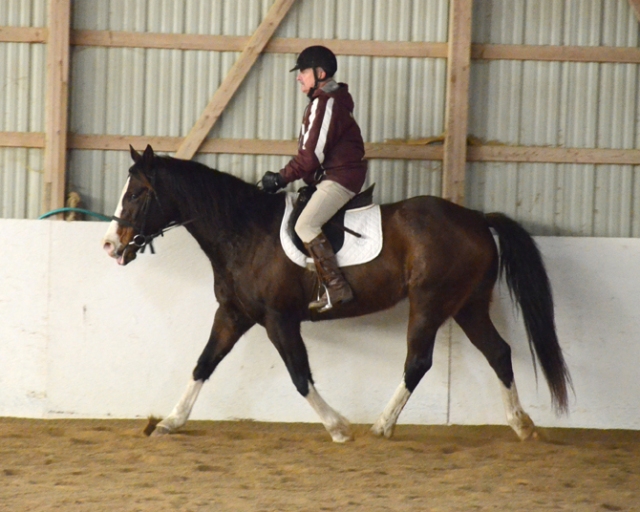 Go along, get along.

This is a paint mare who is one of those incredible “all-purpose” horses–she jumps, she does barrel racing, she does dressage. She is sensitive, but here she is happily going along until… 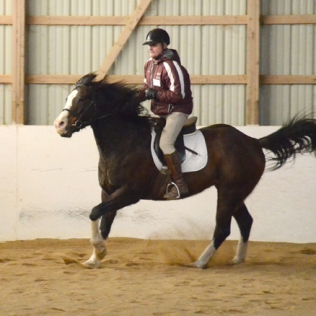 Getting ready to blow… 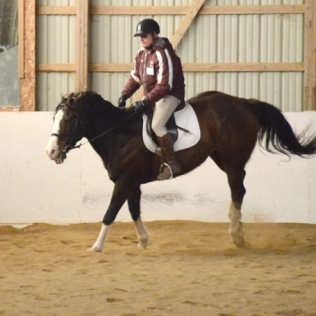 In the left photo, she is getting very annoyed at her rider, who has become too active for her. Too many confusing and/or annoying signals. In the right photo, she is launching into her protest buck. Lesson for rider: keep it quiet! Just like we all experienced on the exercise balls and with the “horse and rider” bridle experiment!