It got dark all of a sudden 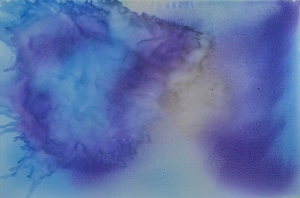 This one is a bit of a throwback to a previous Sky Pads painting. Since it’s part of a series, and the series likes to meander, I have no issue with going backwards.

I guess this latest version could be somewhat of a shocker. I’m sure it will be hard to convince you that the three coats of paint that have been laid down since the first splashy one are really that transparent. For the oil paint nerds among you, here’s what they are, in the order they were done, from first to last.

Over that delightful blue-purple-pale yellow wash came phthalo blue dulled down with a bit of dioxazine purple (both naturally transparent oils) with a few thinned splashes of deep chrome yellow (not transparent, but thinned enough to look like it) in the areas I wanted to highlight a bit. Wait a couple of days for the layer to set, with help from Grumbacher’s oil painting medium III which provides a fast-drying gloss finish. Next layer, phthalo green (naturally transparent), darkened a bit with some cadmium red (not transparent). Repeat waiting for it to dry. Third layer, a mix of indian yellow and dioxazine purple. Both transparent. I adjusted the ratio of yellow to purple in favor of one side or the other depending on whether I wanted to emphasize lighter areas or darken some areas even more. These two colors in particular create a nice range of brown shades when mixed.

At this point things are going “in reverse order”, as I mentioned would happen in a comment on my previous blog post. Way before all these layers I would normally have drawn in the lily pad subject matter, but here we are 3 layers later and no sign of leaves. In fact, until late last night I hadn’t even sketched them out.

If all of this goes according to plan, I will have to paint opaque white areas where the leaves will go and start painting them as if I were back on a blank white canvas. My source photograph is pretty spectacular (and it will never be revealed, just to avoid kibbitzers asking why I didn’t do this or that) so I’m hoping to get that photo’s same spectacular quality, if not a faithful reproduction of it.

1 Response to It got dark all of a sudden