Rooting around in an artist’s brain

I think I started this painting (Sky Pads 28) a little over a month ago. It should have been finished a couple of weeks ago but it insisted on raising issues I had no immediate answer for. So I did as usual, which was to let it sit there, to stare at it blankly, and wait until something suggested itself.

The flat pads in the foreground presented the first challenge, which fortunately just let me stumble through and arrive at something I liked. The issue was color. I had used different base colors for the right set of pads than for the left. I don’t know why. Somehow I just thought in the middle of progress to change the process. When I got to the layers on top of the base colors the combination I used for the right side was not going to work for the left–but—they had to look the same, or at least similar. Otherwise it was going to look like two different paintings. Or at least the work of two different artists. Couldn’t abide that, so I just kept trying things out until I found a combination that worked. Not the best method in the world, but you do whatever works.

First pass underpainting on left side, second pass on right side 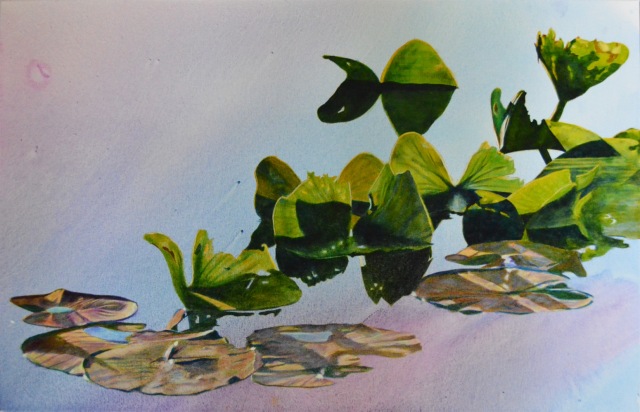 Sky Pads 28, basically finished except for one tiny corner.

After that, completing the nice big green/yellow leaves climbing into the upper right hand corner was pretty much of a routine matter. But all the time I was painting them I was giving the side-eye to the last remaining, teeny tiny area. There was this little red smeary circle with what might be a worm in it in the upper left-hand corner which was totally unintended. See the photo below.

The background. Something landed in the upper left hand corner while it was drying.

I knew from previous experiments that I was never going to get that little circle area to blend into the flow of poured-on paint around it. But I couldn’t make myself just leave it there, regardless of my vow to leave all poured paint “as-is”. It was just too distracting, too unrelated to its environment.

The answer came not from any active searching for it. I just happened to remember that last summer I spent an inordinate amount of time photographing dragon flies out on the Mill Pond. I don’t know why I spent that much time, because I also remember thinking I would probably never have any use for them. Especially since they don’t like to pose for you–you have to track them as they’re flying in order to get anything resembling good focus, and they like to make a lot of sudden dips and turns. I did get one nice shot, though, and as if to make the job easier, it was even facing the right direction for what I had in mind.

Final version of Sky Pads 28 now has a little dragon fly appearing to have just touched down and then lifted off, leaving a little ripple behind.

13 Responses to Rooting around in an artist’s brain